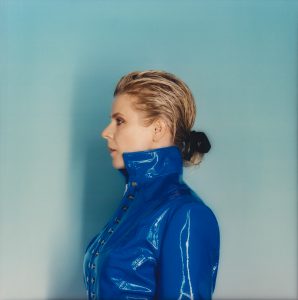 A pop star on her own terms, Robyn only became more acclaimed as she became more independent. After some early success in the ’90s as a more traditional pop artist — her 1995 debut album, Robyn Is Here, featured work by famed producer Max Martin — Robyn responded to the label issues that hindered her momentum and creativity by forming her own label, Konichiwa Records. With 2005’s Robyn, she introduced her gleaming yet heartfelt take on synth pop. Though it took several years for the album to be released worldwide, it garnered accolades that included Swedish Grammys as well as Grammy nominations in the U.S. Robyn continued to innovate in the 2010s: Body Talk, a series of mini-albums, launched two of her most iconic singles, “Dancing on My Own” and “Call Your Girlfriend.” During the eight-year gap between this album and the cathartic dance music of 2018’s Honey, her influence was felt and heard in the work of ambitious and idiosyncratic pop artists such as Lorde, Carly Rae Jepsen, Poppy, and Charli XCX.

Born Robyn Carlsson in Stockholm in 1979, she grew up traveling around Europe with her parents’ theater group and listening to classic American soul on the hi-fi. She wrote her first song at the age of 11 about her parents’ divorce; at 12, she recorded the theme for the Swedish television show Lilla Sportspegeln. Her big break came at 13, however, when the pop star and Legacy of Sound member Meja held a workshop at Robyn’s school and heard her sing her song about her parents. In 1994, Meja got her a record contract with Sweden’s Ricochet Records, which released her debut single, You’ve Got That Somethin’ and the hit Do You Really Want Me (Show Respect).

Though she was still only 16, Robyn began recording her debut album in 1995 with producers Max Martin, Denniz Pop, and Christian Falk — who became one of her most enduring friends — and co-songwriters Ulf Lindström and Johan Ekhé. The result, Robyn Is Here quickly topped the Swedish charts. When the album was released in the U.S. almost a year and a half later, the single Do You Know (What It Takes) hit the Top Ten, as did Show Me Love. She was set to support the Backstreet Boys on their 1997 tour, but she had to pull out of the shows due to exhaustion. In 1998 Robyn began work on her second album, My Truth, which was released the following year in Europe, where Electric was a smash hit single. However, Robyn’s U.S. label requested that she cut two songs about having an abortion from the album; she refused, and My Truth was not released in the States.

After becoming a UNICEF ambassador in 1999 and traveling the world for two years, Robyn returned to music by contributing “Say You’ll Walk the Distance” to the On the Line soundtrack, and moved from RCA to Jive for her 2002 album, Don’t Stop the Music, which was released only in Sweden and Japan; only the album’s singles were released in Europe. Despite its limited release, other artists covered songs from it, including Beverley Knight, who released a version of “Keep This Fire Burning.” Disheartened by her continuing label troubles, Robyn returned to Stockholm in 2003, where she heard the Knife’s debut album, Deep Cuts. She was so impressed by the duo’s experimental, futuristic synth pop that she collaborated with them on her next single, Who’s That Girl. However, her label didn’t like the track and instead released 2004’s Robyn’s Best in the U.S. and another compilation in Sweden.

To take full control of her music, in 2005 Robyn bought herself out of her contract, formed her own label, Konichiwa, and worked on songs with the Knife, the Teddybears STHLM’s Klas Åhlund, and Alexander Kronlund. The single Be Mine and her self-titled fourth album arrived later that year and earned several Swedish Grammys, including Best Album, Best Female Pop Artist, and Best Songwriter (which she shared with Åhlund). Robyn continued to gain momentum in 2006, appearing on Basement Jaxx’s Crazy Itch Radio and releasing the Rakamonie EP, a collection of covers and alternate takes. Robyn was released in the U.K. in 2007, as was the single Konichiwa Bitches. The ballad “With Every Heartbeat” reestablished Robyn in the U.K., reaching number one on the singles chart. Rakamonie was finally released in the U.S. in early 2008, with Robyn following that April; the album earned a nomination for Best Electronic/Dance Album at the 2009 Grammy Awards. She began working on new material, choosing Diplo, Klas Åhlund, and Röyksopp as some of her collaborators.

Early in 2010, the single Fembot arrived, along with the news that Robyn would release not one album that year but two short ones, beginning with Body Talk, Pt. 1, which was released that June. Three months later, Body Talk, Pt. 2, which featured the single “Hang with Me” and a collaboration with Snoop Dogg, arrived. In November 2010, Body Talk, which compiled tracks from the previous mini-albums plus new songs, appeared. After spending a couple of years touring with acts including Katy Perry and Coldplay, and collaborating with the Lonely Island and Snoop Dogg, Robyn returned with new material in 2014. A collaboration with longtime friends Röyksopp, the Do It Again mini-album blended the best elements of both parties’ music. Following Falk’s terminal pancreatic cancer diagnosis, he, Robyn, and keyboardist Markus Jägerstedt formed La Bagatelle Magique; their Love Is Free EP arrived in August 2015, a year after Falk’s death. More collaborations followed in 2015, including appearances on releases by Neneh Cherry (Blank Project) and Kindness (Otherness). During this time, Robyn also founded Tekla, a science and tech festival for girls, with Stockholm’s Royal Institute of Technology.

In May 2016, Robyn began the RMX/RBN series, which featured remixes of some of her best-loved songs by nine producers, including Cassius, Joakim, the Black Madonna, and Mr. Tophat, who she also worked with on the 2017 EP Trust Me. In March of that year, her song “Honey” appeared on the final season of the HBO series Girls, which had previously featured the Body Talk single “Call Your Girlfriend.” “Honey” also became the title track of Robyn’s eighth album, which found her dealing with the loss of Falk and her separation from her longtime partner, Max Vitali, on free-flowing songs inspired by house and disco. Featuring contributions from Mr. Tophat, Metronomy’s Joseph Mount, Åhlund, and Kindness, Honey appeared in October 2018.