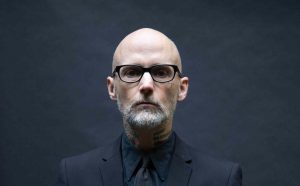 Richard Melville Hall, 11 September 1965, New York, USA. A New York DJ, recording artist, Christian, vegan and Philosophy graduate. Moby is so nicknamed because of the fact that he can trace his ancestry to the author of the famous whaling tale.

This is by no means the only interesting aspect of his idiosyncratic artistic life. He refuses to travel anywhere by car because of the environmental considerations, and generally displays little of the public anonymity that is the creed of the underground DJ. In 1991, he took the Twin Peaks theme, under the guise of “Go”, into the UK Top 10. Although that appealed to the more perverse natures of both mainstream and club audiences, the release of “I Feel It”/”Thousand” in 1993 was yet more bizarre. The latter track was classified by The Guinness Book Of Records as the fastest single ever, climaxing at 1,015 bpm. It was typical of Moby’s playful, irreverent attitude to his work. In his youth he was a member of hardcore punk outfit the Vatican Commandos, and even substituted as singer for Flipper while their vocalist was in prison.

He has brought these rock ‘n’ roll inclinations to bear on the world of dance music: at the 1992 DMC/Mixmag Awards ceremony he trashed his keyboards at the end of his set. His introduction to dance music began in the mid-80s: “I was drawn to it, I started reading about it, started hanging out in clubs. For me house music was the synthesis of the punk era.” He collected cheap, second hand recording equipment, basing himself in an old factory/converted prison in New York’s Little Italy district. The albums issued by New York dance label Instinct collect the artist’s early work. Ambient comprised unissued cuts from 1988-91, composed of barely audible atmospheric interludes. Moby signed to leading independent Mute Records in 1993, and the following year released “Hymn”, a transcendental religious techno odyssey, distinguished by a 35-minute ambient mix and a Laurent Garner remix. The track was included on his eclectic major label debut, Everything Is Wrong. His own remix catalogue includes Brian Eno, LFO (“Tan Ta Ra”), Pet Shop Boys, Erasure (“Chorus”), Orbital (“Speed Freak”), Depeche Mode and even Michael Jackson. He moved away from his dance base in 1996 with the thrash rock of Animal Rights, and in turn sounded more like Johnny Rotten.

His “James Bond Theme’ debuted at UK number 8 in November 1997. The attendant I Like To Score was an uneasy experiment in soundtrack work. Another change of style was apparent on 1999″s Play, a superb album on which several tracks were based around sampled field recordings made by folklorist Alan Lomax in the earlier part of the century. Play became a remarkable sleeper hit, thanks in the main to the licensing of every track on the album for use in advertisements. Moby repeated the Play formula to lesser effect on 18.